Cannabis legalization has been an enormous success with a significant economic impact. The new report from this Federal Reserve Bank district shows how cannabis-related businesses create jobs and generate tax revenue.

An analysis was published last week by the Federal Reserve bank of Kansas City, which covers the 10th District of the Federal Reserve, which includes Colorado, Kansas, Nebraska, Oklahoma, and Wyoming; 43 counties in western Missouri; and 14 counties in northern New Mexico: found that the legal cannabis industry represents critical sectors of the economy that are expected to grow as more states enact tax-and-regulate models.

It also acknowledged that federal prohibition had created unique challenges for the industry and local communities within the tenth District, mainly as it concerns the current lack of access to traditional banking systems.

“In addition, tax revenues have increased as cannabis sales have grown,” it continued. “However, cannabis legalization has also been associated with challenges for both the industry and localities more broadly, including access to banking services and concerns among some local officials about its effects on public health and safety.”

“Overall, the cannabis industry has had a significant effect on the economies of Tenth District states in the initial years after legalization,” it said. “The emergence of the industry has led to higher employment and stronger demand for commercial real estate.” 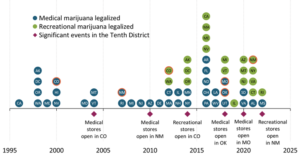 The cannabis industry has tightened real estate markets nationwide, and its businesses have looked to buy industrial and retail space. As a result, some residential realtors have reported an increase in all-cash offers. According to a 2019 survey, 23 percent of residential realtors in states that had legalized medical and recreational cannabis before 2016 said that the industry had contributed to tightening the housing market due to all-cash purchases.

According to recent reports, there is increased demand for storefronts, land, and warehouses in states where cannabis is legal. For example, a study from CBRE found that the cannabis industry accounted for almost 36 percent of Denver’s total net absorption in industrial space from 2009 to 2014 and occupied about 2.6 percent of Denver’s warehouse space. By the end of 2016, the cannabis industry had taken up a lot of space in Denver.

This was in older or less developed warehouses. But this may help reduce vacancies in less desirable properties. CBRE has said that the effect on commercial real estate in markets outside Colorado will depend on the regulations for cannabis. Regulations might include whether cannabis can be grown on farms or in greenhouses as well as warehouses. The effect will also depend on zoning laws, which determine how businesses operate. The outcome will additionally rely on the tightness of the Class B and C industrial market before legalization.

The cannabis industry has also influenced state tax revenue through cannabis sales. Tenth District sales are strong but vary considerably across states due to differences in state regulations, consumer demand, and the cost and ease of permitting.

The cannabis industry is more well-established in Colorado than in any other state in the District. This has led to higher cannabis sales in Colorado than in any other district. In 2021, these sales will total more than $2.2 billion. However, it’s important to note that this amount accounts for less than 1 percent of all consumer spending in the state. The industry is still surprisingly large in Oklahoma, which only has medical cannabis sales. In 2021, it was estimated that sales would reach $945 million. The strong sales in Oklahoma may be because there are fewer restrictions on the cannabis industry than in other states. This includes both the licensing for businesses and patients. About 9.3 percent of Oklahoma residents hold a medical I.D. card requiring a physician’s signature. However, unlike in other states, the issuance of the I.D. card is not restricted to specific underlying health conditions.

Oklahoma has been issuing cannabis business licenses very quickly and cheaply, which has led to it having more retail cannabis stores than any other state in the country. However, the state legislature recently passed a moratorium on issuing new licenses, which is expected to last until 2024. This may cause sales growth to slow down in the future.

As cannabis sales have increased in the Tenth District, state and local government coffers have also grown. The tax rates on cannabis vary significantly across states, with taxes typically much higher for recreational sales than medical sales. 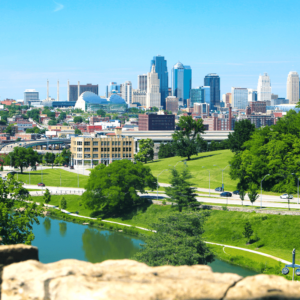 Among the Tenth District states, Colorado brought in the most from cannabis sales taxes, excise taxes, and licensing fees in 2021, with revenue totaling more than $423 million. The cannabis industry will generate a lot of money for Oklahoma in 2021. It is estimated that New Mexico’s first year of recreational sales (medical cannabis sales are exempt from the excise tax) will generate $50 million in revenue. Missouri has generated less than $10 million since sales began. Even though cannabis taxes have brought in money for states and projects like education and veteran services, the taxes generated from cannabis are a tiny percentage of state and local government revenue overall. In Colorado, the state with the highest revenue, cannabis taxes made up just 2.3 percent of state tax revenue in 2021.

Overall, the cannabis industry has had a significant effect on the economies of Tenth District states since they legalized it. The industry has created more jobs and robust demand for commercial real estate. In addition, tax revenues have increased as cannabis sales have grown.

However, legalization has also been broadly associated with some challenges for the industry and localities. These include access to banking services and concerns among some local officials about its effects on public health and safety.

The Federal Reserve bank doesn’t advocate for federal reforms. Still, it suggested that the state markets could be empowered by congressional action to provide cannabis businesses with access to the banking system.

Did you find this blog helpful or insightful? Feel free to share on social media by using the super-easy share buttons below!